Contributed by: Pat B

Scientists have described whale sightings off the Cornish coast as one of the "largest gatherings" of the species ever seen in British waters.

Researchers spotted 21 fin whales 50 to 70 miles offshore, feeding near the surface over 30 minutes.
The fin whale, the second largest animal on the planet, is a globally endangered species.
Dr Tom Brereton, research director from Marinelife, said it was an "incredibly rare event". 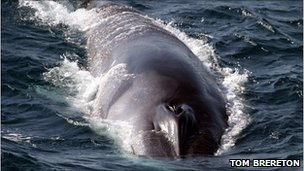 Dr Brereton said that it's rare to see those numbers - 20 or more - especially here in British waters.
They were possibly chasing a dense mass of krill.