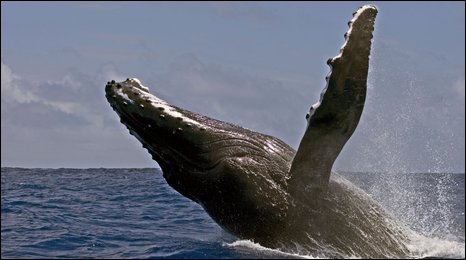 Searching for a friendly female?

Humpback whales form lasting bonds, the first baleen whales known to do so.

Individual female humpbacks reunite each summer to feed and swim alongside one another in the Gulf of St Lawrence, off Canada, scientists have found.

Toothed whales, such as sperm whales, associate with one another, but larger baleen whales, which filter their food, have been thought less social.

The finding raises the possibility that commercial whaling may have broken apart social groups of whales.

Details of the discovery are published in the journal Behavioral Ecology and Sociobiology.

Dr Christian Ramp and colleagues of the Mingan Island Cetacean Study group based in St Lambert, Canada have been studying whales in the Gulf of St Lawrence since 1997.

Together with researchers from Germany and Sweden, the scientists are recording the movements of baleen whales including blue, fin, minke and humpback whales, adding to a set of data that stretches back 30 years.

Baleen whales, which are the largest of all whales, possess huge baleen plates in their mouths, which they use to filter out small prey such as krill and plankton from the water.

Using photographic identification techniques, the researchers can spot which individual whales appear from one year to the next.

During this study, they have found that the same humpback whales reunite each year.

Having spent the rest of the year apart migrating and breeding, individual humpbacks somehow find each other again in the open ocean each summer, spending the season feeding together.

The longest recorded friendships lasted six years, and always occurred between similar-aged females, and never between females and males.

"I was very surprised by the prolonged duration," Dr Ramp told the BBC.

"I was expecting stable associations within one season, not beyond. I was particularly surprised by the fact that only females form these bonds, especially females of similar age."